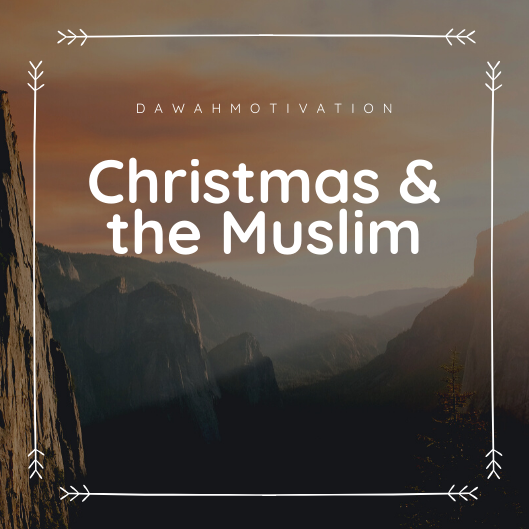 Christmas and the Muslim

All praise is due to Allah, the One who sent the Prophet Muhammad (saw) with guidance on all things, including festivals and celebrations.

There is plenty of discussion and debate around Christmas and the following short article is designed to educate the modern reader about the origin of Christmas and how it compares with the Islamic viewpoint on festivals.

Christmas is a well established festival that is celebrated every year in more than 160 countries. Christians and non-Christians alike take part in festivities centred around the 25th of December for a variety of reasons.

Other festivals in December

Whether it is the Vainakh festival of Malkh, the Celtic Yule, the Greek Kronia, Roman Saturnalia or the Chinese Donghzi, the period around the winter solstice (22nd December) has long been celebrated around the world by people who hold pagan beliefs.

Similarly, celebrations of the birthday of a deity connected to the sun, such as the celebrations for the Egyptian deity Horus, the Persian sun deity Mitra, and the Roman Sol Invictus are often celebrated on or around the 25th of December.

It is known that the Saturnalia festival in honour of the planet Saturn was extremely popular in Roman times (200BCE to 200CE). Elaborate rituals were performed during this festival, and many Christians are believed to have taken part.

As late as 200 years after the supposed death of Prophet Jesus (as), the Christians were recorded as not celebrating his birth.

This shows that even though early Christians had a lot of reverence for Jesus (as) they didn’t choose to express their devotion by way of celebrating his birthday. However, it is known that Christians lived side by side with Pagans for centuries in the absence of a sunnah which they themselves chose to abolish at the behest of Paul of Tarsus. It is natural therefore that at some point they would have looked to Pagans to establish a rhythm, much like the Muslims have around the two Eids, Ramadan, As-Shura and the fasts of various months. Unsurprisingly the Christians festivals followed. They started to engage in calculations based in astrology to establish certain dates, like the birthday of Jesus (as). Gradually, birthdays would become more significant and festivals would mark the occasions.

We know that this process of attaching significance to a birthday must have taken at least 200 years since historically there is a refutation of the practice by the early Church fathers. In circa 245CE the Church father Origen wrote in his explanation of Leviticus that the very concept of celebrating the birthday of Jesus (as) was sinful ‘as if he were a King Pharaoh.’ Origen is further reported by the Catholic encyclopaedia to have said that “of all the holy people in the Scriptures, no one is recorded to have kept a feast or held a great banquet on his birthday. It is only sinners like Pharaoh and Herod who make great rejoicings over the day on which they were born into this world.” (Origen in his Homily to the Leviticus. VIII in Migne P.G., XII, 4950).

Early Christians took the dates of crucifixion in the Gospel of John and others, and them added nine months to arrive at a date. Due to the conflicting nature of biblical sources however, no clear date could be agreed on and different churches based in different regions celebrated Christmas on different days i.e. 25th of December, 6th of January and 20th of March etc. Over the years for reasons not completely understood, the date of 25th of December came out on top. It is likely that the already popular celebration of Saturnalia contributed to Christmas being on the 25th of December as the festival was celebrated around the same time.

Most people believe that Christians picked the festivals of Sol Invictus and/or Saturnalia and rebranded them into Christian traditions. This explanation, although partly true, is an oversimplification and has little historical evidence to support it. The earliest record of Christmas being celebrated was around 202CE, however the first official declaration of the festival of Sol Invictus was 274CE under the rule of Emperor Aurelian. Considering that Christmas predates the festival of Sol Invictus it is likely that the Pagans copied their festivals from the Christians. As Muslims we must be careful to not misrepresent the religions of others lest they do the same with ours.

Apart from choosing the date of Christmas, the festival is riddled with Pagan rituals and symbolism. Providing an exhaustive list of Pagan symbolism is beyond the scope of this introductory article, however it is sufficient to say that everything from Santa Claus, who bears a resemblance to the norse deity Odin and could either represent Odin or a benevolent magician serving the people with his magic during the winter months, to the use of astrology with the symbolism of the guiding star and the three Kings is Pagan in origin. Even the Yule log is representative of ritual fire which is burned by Hindus and Pagans during festivals. Furthermore, mistletoe and Christmas trees are essentially taweezes (amulets which are believed to ward off evil or grant a blessing).

Such behaviour and practices go against biblical teaching as stated in Jeremiah 10:3 and 4: “… for the customs of the peoples are false. A tree from the forest is cut down, and worked with an axe by the hands of a craftsman. Men deck it with silver and gold; they fasten it with a hammer and nails so that it cannot move…”

There is some debate as to whether this biblical verse speaks specifically about a Christmas tree, but there is no denying that the decoration of a tree for religious purposes is not a Christian concept.

The gift of the two Eids

Consider the below Hadith

Sunan Abi Dawud 1134. Grade: Sahih according to Al-Abani and Arnaa’ut.

When we look into the festival of Christmas we can really see the sad state of the Christians. It is one thing to picture Christmas as a festival derived from Pagan routes, but it is completely another to see that the Christians chose it by themselves and that Jesus (as) and/or the Bible had no influence in choosing the festival. The very person they claim to love did not tell them to do what they do to honour him.

Furthermore, it hurts to consider that the Christians didn’t even have a festival to communally celebrate their relationship with Allah! Instead they had to make one up and took inspiration from astrology, paganism and sheer guess work! How lost would I feel if I were to be following such a lost religion. Without doubt I would want to know the best way to please Allah both in belief and actions.

How blessed are Muslims that we were told exactly how many festivals to celebrate, when to celebrate them, how to go about celebrating them/not celebrating them and what not to celebrate i.e. Christmas, Diwali, the birthday of the Prophet (Sallalaahualaihiwasallam) etc. In this way our celebrations were not void of a relationship with Allah.

It’s a shame to see some Muslims get sucked into the hype that goes with Christmas and start to engage in a festival that was chosen with no divine revelation, yet not make more effort at a festival that was chosen by Allah. In doing so, do we not leave what Allah chose and choose to celebrate that which Allah did not encourage us to choose? Like it or not, it seems pretty clear that we have chosen to leave the people who follow Allah’s guidance for these poor lost souls who have created this Frankenstein monster which they claim represents their love for who they call the ‘son’ of God.

May Allah protect us all from such misguidance and make us appreciate the Sunnah more so we may safeguard his religion on earth and benefit ourselves and others from it. Ameen.

Your brother in Islam