This blog has been submitted by Sister Fatima Ashraf. Member of the DM team.

I always had had an urge of calling people towards the Deen of Allah but due to the lack of support around me, I had no team to work with. Instead of losing my hope and motivation, with the help of Allah, I started talking to the sisters in my circle and when they showed interest and passion in doing the same what I wanted to do, we ended up in having our own team. We started planning and did some trainings together. After spending months in trainings and working on our own selves first, when we gained enough self-confident, the members of the team decided to start calling people towards the Deen of Allah publicly. Now because of the rigorous trainings that we all had taken, all the members were quite enthralled and eager to do Da’wah.

Some of the sisters in my team did quite an astounding job by starting their own circles. Here, I am going to share some of the activities and the outcome of those which each team member did on her own.
Sister Anum: First off comes our sister, sister Anum. She arranged and conducted a workshop in her college on the topic of, “Respect and Regard”. In her workshop, she discussed with the youth on how we should respect others and should show mercy upon people. While she discussed the importance of the role of parents and teachers. She emphasized on how and why Islam focuses so much on doing the right parenting. She gave examples of Anbiya’a and how they played their role as a parent and what Allah has demanded from us as a parent, teacher, doctor etc. In between her talk, she kept on relating the topic with the purpose of one’s life. And how despite being from different professions, they can still serve the actual purpose of their life.
Outcome: The response was overwhelming as they were not aware of the actual life purpose or even if they were then many of them were not aware on how they could work towards their purpose of life while not disregarding the worldly life altogether.
Sister Areeba: The second sister in our team is Sister Areeba. She is a student at UVAS and is a teacher in an Academy. She tried doing some Dawah in her academy.
According to her narration, she always used to try giving Dawah to her friends and relatives during gatherings. But, this time, she tried doing something different. Instead of doing the Dawah within friends and family alone, she tried giving Dawah to her colleagues in the academy where she teaches. One day, she got a time to sit with her colleagues and while all of them were cracking jokes, she tried changing the subject of the discussion and turned the discussion by asking them the purpose of their life. And how could they define it? Almost all of them had temporary worldly purposes. And she made them ponder on what if they couldn’t get their desired purpose? What would be left then?
When none of them could answer the question, she made them realize that how a purpose should be timeless. Something which should not be affected by the circumstances and the time. She made them realize on how their spiritual growth and the connection with Allah subhana’wa’tala should be the top priority. That should be one’s purpose of life. As soon as a person becomes aware of this real purpose of one’s life, the rest of the matters start becoming secondary. When the connection is built with Allah, then the happenings and the tragedies of the life start making a point in one’s life. The good and bad, all the events start directing a person towards one’s purpose. Recognizing Allah subhana’wa’tala and a connection with Him would actually direct a person in the right direction. And that’s what a person’s ultimate purpose should be. Furthermore, she told them on how a Muslim can become a strong person and how different a Muslimah woman is from the rest of the other religions’ women.
Outcome: The aura of the environment was amazing that everyone could actually feel that in the air. Everyone listened the whole conversation with keen interest as it was quite apparent from their faces.
Later on, by putting some individual efforts, the team decided to do Dawah at a book festival in Lahore. Since the fair was for two days thus our team decided to go in pairs on each day and tried approaching random people.
One day one, sister Fatima and sister Z went and tried talking with random people. Since it was a book fair, thus they initiated the conversation with the books and ended up having some good discussion.
On day two, another pair of sisters, sister Khadija and sister Areeba went there. They tried approaching ladies who seemed non-practicing and instead of talking on issues like Niqab or whether music should be heard or not, they tried having a light conversation on the current issues of youth.
Interestingly, while approaching random people, they came across a lady and talked about her interests. While they discussed her goals and interests, they asked a question promptly on whether she agrees on how youth is suffering and have unaddressed issues? When she agreed, the sisters told them that they were there for addressing those issues because they cared for the well-being of the fellow human beings. And how anyone could ask and discuss with them their issues and that they would not be judgmental. Apparently, the lady got impressed by their approach and thus ended up exchanging her number with them.
Outcome: Alhamdulilah, the experience went quite well and now the team is feeling more enthusiastic in calling people towards the Deen of Allah.
Fun Fact: All these activities took place in the time period of one month alone. In sha Allah, we plan on doing more of such activities in the coming months. 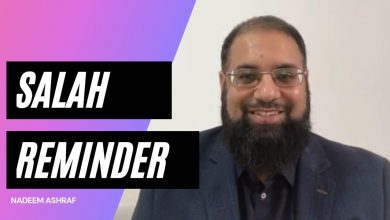 DM SALAH MOTIVATION: Want your Salah to benefit you?

DAWAH JOURNEY OF A KARACHI SISTER!